Key Question:  Why a fully sprinklered building burns to the grounds? 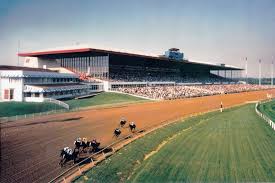 The project consisted of investigating the most likely causes and progress of a catastrophic fire in the racetrack complex This fire became the largest structural fire in the history of the State of Illinois. The fire occurred in a racetrack complex (Paddoc and grandstand buildings) causing over 150 million in damages on July 31, 1985. The grandstand structure and the Paddoc building caught on fire.? Both structured were originally erected in the 1930s. Eyewitnesses reported that a fire started within the ballast of a neon light fixture in the main lounge of the VIP 2-level structure. That VIP structure was not provided with smoke detectors or with sprinklers. Fifty minutes passed before the first responders arrived at the site. 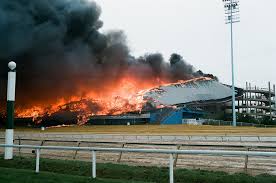 Soon, it was realized that the fire spread to concealed areas which were located between the grandstand and the lounge under the bleachers. A decision to cut through the concealed spaces provided access to fires but it also vented the smoldering fires. The fire became overwhelming even though there were over 250 firefighters on the scene. It was demonstrated why a fully sprinklered building burned to the ground in spite of 250 firemen trying to extinguish it. The challenge was to rationalize the most likely fire scenario and to explain why the fire eluded over 250 firefighters to cause a total loss. 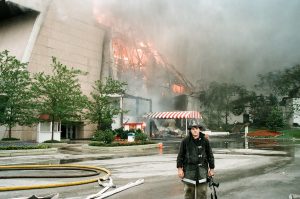 To answer that challenge, the following major tasks were undertaken. These were fire modeling simulations and the illustration of the sequential progression of the fire from ignition to full involvement via computer animation. Therefore, the Client’s goal was met as his insurance carrier recovered the maximum of liability coverage from of the sprinkler contractor’s liability insurance.

The fire was so large that it did destroyed the building of origin and the grandstand. Additionally, the involvement of Daniel Bak occurred a few years after the date of the loss. Only depositions, photographs, and news reports were information available to reconstruct what has led to total loss.

The grandstand was “fully” sprinklered

The grandstand was originally built in 1930 and it did undergo through the years many renovations. By virtue that the grandstand building is designed as a grandstand and therefore one would anticipate concealed spaces. It was concluded that the building could not be called a fully sprinklered building but rather it ended up being a partially building.

It was proposed that it would be beneficial to reconstruct the grandstand fire.? The tool to be used was the state-of-the-art fire model “FAST” back in 1989.

Additionally, it was important to show fire modeling results graphically. It was then decided to use an animation software to show how the fire did spread through the concealed spaces of the grandstand..

The fire modeling tool of choice (at that time) was fire model “FAST” (Fire And Smoke Transport).

Use of Fire modeling and computer animation

It was clearly demonstrated that the use of both fire modeling and computer animation did show how and why the fire overwhelmed over 250 firefighters.

The insured (The Arlington Race Track Management) was awarded $10 million dollars plus all litigation fees.

The matter was successfully concluded in the favor of the Building owner. Sprinkler contract was found responsible for the loss because they omitted concealed spaces that were supposed to be sprinklered.